Mesa Contemporary Arts Museum is distinguished by its thoughtful, imaginative approach to showing works by local, national, and international artists. Its solo and group exhibitions often feature women artists and artists of color, bringing much-needed diversity to the art scene. We never tire of seeing the museum's El Mac mural depicting an immigrant from Guatemala holding a lovely long-stemmed rose. Expect to see not only traditional works of art here, but also murals painted on gallery walls, rows of mounted skate decks, and large-scale installations created with offbeat materials like plastic bags. Best of all, the museum routinely exhibits work by such local artists as Rachel Bess, Colin Chillag, Joe Willie Smith, Marilyn Szabo, and Fred Tieken. They even throw fabulous season openings where art, live music, and conversation converge to create a strong sense of community.

EXPEDIA RECOGNIZES MESA AS ONE OF AMERICA'S MOST ARTISTIC TOWNS

Mesa may be located in the arid desert, but its cup runneth over when it comes to access to the arts. Downtown Mesa is well worth exploring, with its over 200 sculptures and art hub. Mesa Arts Center is a veritable one-stop shop of creativity with spaces for events like WordPlay Café (an open mic for poetry, storytelling, and music), performing and studio art classes, Broadway shows and concerts, and exhibits in the museum. Mesa Contemporary Arts is a free, five-gallery complex that hosts changing exhibits by today’s working artists. The MCC Performing Arts Center stages a wealth of music, dance, and theater, and the new art gallery at the school showcases student art. What’s more, discovery blossoms early at the i.d.e.a. museum, which promotes children’s exploration of creativity and learning. 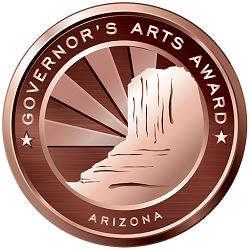 Presented by Arizona Citizens for the Arts, This award recognizes a nonprofit arts organization or a school that has demonstrated significant support for or participation in activities fostering excellence in, appreciation of, or access to arts education in the State of Arizona. Read more: https://www.azredbook.com/homepage-grid-feature-spot-1/36th-annual-governors-arts-awards/ 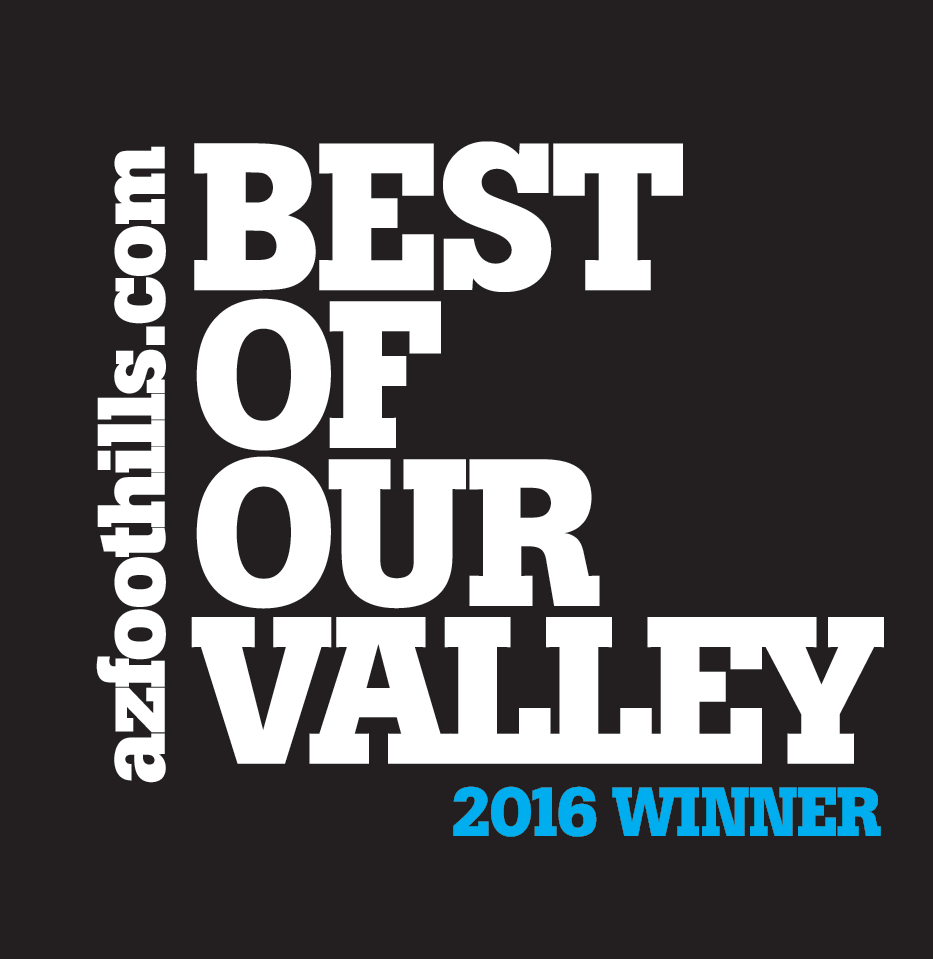 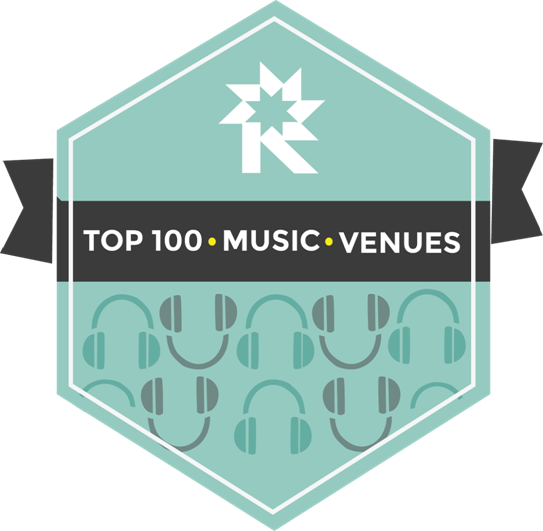 #8 IN THE BEST PLACES TO SEE LIVE MUSIC: THE RUKKUSPICKS

In a list of best venues across the country to experience live music, Mesa Arts Center was recently spotlighted as #8 in The Best Places to See Live Music: The RukkusPicks. The article states, “Whether you’re into comedy or dramatic theater, jazz or classical music, Arizona’s Mesa Arts Center is guaranteed to have something for everyone.” 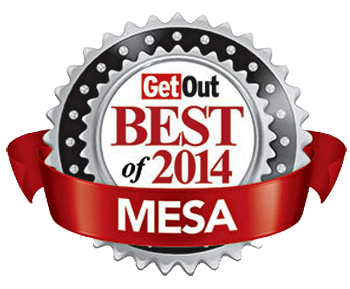 The MAC's just-completed Day of the Dead celebration is two days of live music and dance performances, children's activities and arts and crafts. In keeping with the Mexican holiday tradition, which has pre-Columbian roots, the centerpiece of the event is a community altar where visitors make ofrendas honoring departed loved ones. 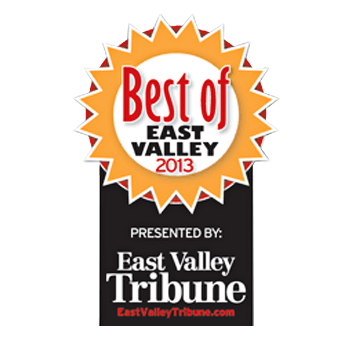 The great thing about the Mesa Contemporary Arts Museum isn’t that it houses expansive galleries chock full of pieces of famous modern art.  The great thing is that it doesn’t.  The ---- selected by readers as “Best Museum / Art Gallery” during “2013 Best of East Valley” voting boasts only three galleries, and this small space allows for more intimate, more manageable museum experience.  “I like to think that it’s a place for everybody,” says curator Patty Haberman.  “We try to do interesting, exciting things. We’ve done a show with low-riders; we’ve done a show with motorcycles; we did a show about tattoos…We are contemporary, but I think it’s a place to come and experience a lot of different kinds of art.”

The 2012 Venue Excellence Awards were presented in Fort Lauderdale, FL., July 23rd at VenueConnect, IAVM's 87th annual conference and trade show. These prestigious awards recognize venues such as stadiums, convention centers, arenas, performing arts centers, and academic institutions that demonstrate excellence in the following four criteria: service to the community, team building/professional development, safety and security, and operational excellence. The criteria used to evaluate the venues are at the core of IAVM's mission, and are key components to the success and vitality of the venue industry. A committee of industry leaders chose the finalist for each venue type, and winners were approved by the IAVM Board of Directors.

The proliferation of arts venues is a case of the more the merrier as far as we're concerned. Yes, the added competition has put the squeeze on some local presenters, but it also means more cultural offerings for Valley residents who don't care to drive 20 miles to see a show. But if we had to pick a favorite, it would be the MAC, both for its invitingly walkable campus, complete with an artsy "arroyo," and for the breadth of its offerings.

The four theaters host local performance groups as well as such national headliners as Yo-Yo Ma, Death Cab for Cutie and Lily Tomlin. In addition to art galleries and a museum shop, MAC engages the community with on-site studio classes in art, pottery, acting, dance and more. 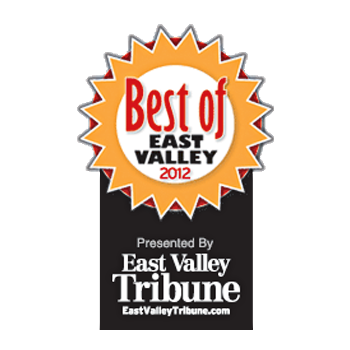 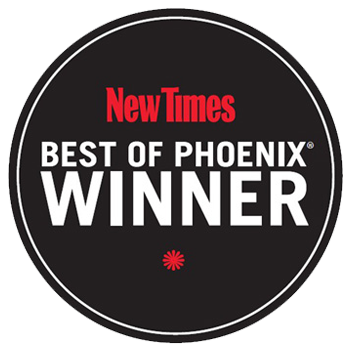 Mesa Arts Center is known for bringing plays, guest speakers, and classical dance to the Valley, but the venue has established itself as a prime concert spot in recent years. Indie acts like The Weepies and The Decemberists are given equal footing with bluegrass acts like Steve Martin and the Steep Canyon Rangers and avant-jazz from Return to Forever. The seating is plush and comfortable — and though it's tough to rock out at the MAC, the sound quality is gorgeous, the lighting is top-notch, and the surroundings are beautiful. 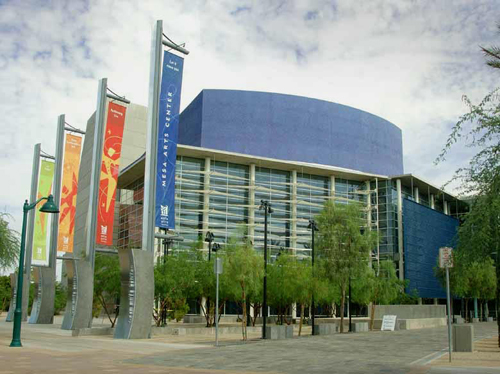 The Arts & Business Council of Greater Phoenix (A&BC) has named the Mesa Arts Center as its "Arts Organization of the Year" for 2010. The result, announced Wednesday during an awards ceremony at the Sheraton Phoenix Downtown Hotel, was decided by a panel of 42 independent judges from across Maricopa County.

A&BC states that the Mesa Arts Center displayed excellence when it "launched four major initiatives to expand the reach of arts and culture in its community."

These included the ongoing art-centric MACFEST event and the Mesa Bucks program, which gives shoppers discounted admission to Mesa-area arts and cultural events.

The 210,000-square foot MAC, opened since 2005, offers a year round schedule of art exhibits, concerts, and theater events. 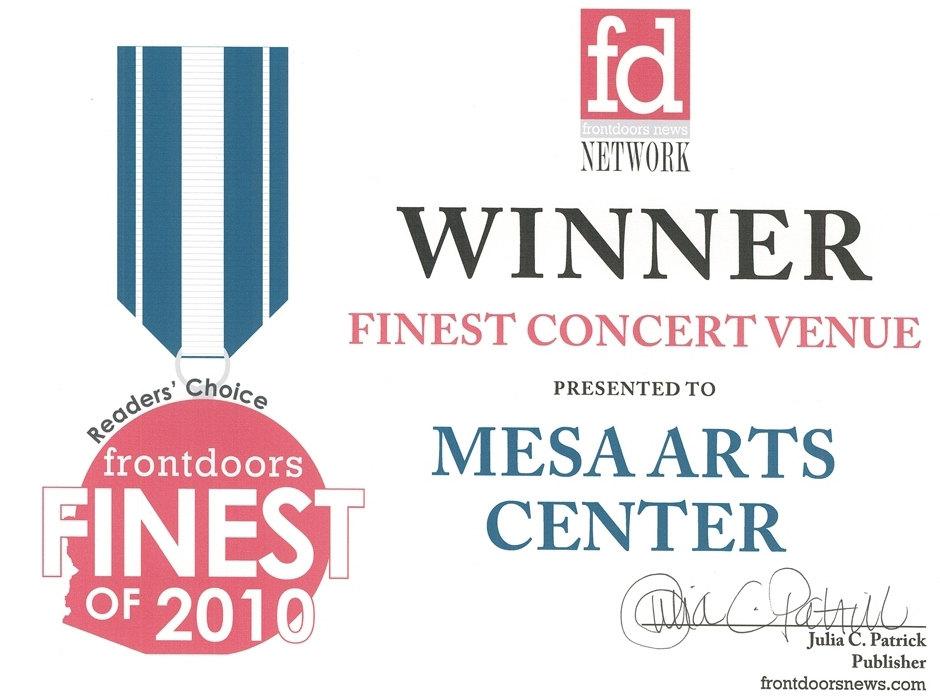